Babi Guling is a suckling pig speciality from Bali, Indonesia. Every day, visitors line up in droves at one of the island’s most popular locations. Ever since it was featured in a well-known American TV show, 2 more branches had to be opened. But what tourists don’t line up to see is how the Balinese prepare this delicacy. According to the OECD, over 310,000 tons of meat were consumed worldwide in 2015. The tendency is steadily increasing as the world population grows alongside a ravenous appetite for meat. A 4% increase is predicted for the next 10 years. Developing countries are catching up to first-world countries slowly but surely when it comes to meat consumption per head, as meat is associated with prosperity in most countries. Even fifty years ago, Sunday roast was but a special event in most developed countries. Meat was rarely eaten and was celebrated at the table. Fine cuts were only acquired through a trusting relationship with one’s butcher, whereas these days, anybody can acquire meat from the supermarket. The richer the country, the less of a relationship the consumer has with livestock husbandry and the animals themselves. Prettily packaged and nicely sliced, the finished meat products have no faces. Many people have forgotten what it means to slaughter. Even more have never seen what slaughtering actually looks like. Thereby, livestock farming is the second-largest producer of greenhouse gases worldwide behind coal, oil and gas. More importantly, what we need is to establish a relationship with the breeding, slaughtering and production of meat, in order to go about using these precious resources in a sensible way. 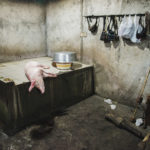 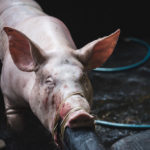 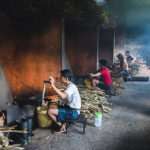 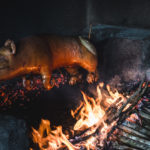